28th  April. I started my day at 5-15. I cycled in the dark. My target was to reach Cocklebiddy that morning. I met a sunrise on 20km to roadhouse. There was a turn to Bird observation there but it means another 35km so I skipped it.This morning I was thinking about all my family. I missed them all.

10km to Cocklediddy a wind changed to strong western. I reached a roadhouse and decided to eat some soup. But there were only burgers on the menu. Other dishes were available from 5pm only. So I bought a coffee milk to prepare museli.

There was a big cell with many parrots here. But there were only green ones.

I was sitting on a terrace while Toyota Prada arrived and two men came out for breakfast. We talked with each other. When they learned that I’m from Russia they started to ask me about how people live in Russia. I believe it is great when people try to findfirst-hand information about the current situation in comparison to what they get from TV and internet. It means they call into question a one-sided opinion.

I told them about Ukraine, that the current situation is very close to catastrophic. It’s a great country with smart people, but unfortunately most smart people already left the country. The big problem is that Ukraine has never had a strong leader who cares about the nation and not only about his own money. Crimea annexing prevented bloody mess in the region. Do you hear about conflicts in Crimea now? No. But a weak new Ukraine’s government doesn’t control the rest of the country except for a capital city.

They asked me about the gay rights in Russia. They believe all gays in Russia are witch-hunted and humiliated. They told me about a Russian guy who was pursued and had to return to UK to save his life. I think he was looking for a way to stay in UK and used media to create an image of a victim.

The Western media shows catastrophic situation with homeless children in Russia. I said we do have problems with children whose parents are alcohol addicted and cannot cares about their kids, so the kids run away and become homeless. But it’s not that often as it is shown in the media.

I also was curious and asked about Australia. Why aboriginals are always drunken in cities that I had passed. They said that after the government banned to sell alcohol to them they started to smell petrol. I tried to imagine it and said we had that stage it in the 90’s. Only a few aboriginals are working even though they have a better chance for employment.

They told me that many British people moved to Perth and bought property in the city. And later I got a confirmation about the growth of property prices in Western Australia from local TV.

They were heading to Perth and gave me contact phone and e-mail just in case I’ll be in Perth. I spent a good time talking to these guys. When you have a schedule for a week which only includes  waking up, cycling, evening camping and the same again, you don’t have time for communication with other people.

I continued to cycle through Nullarbor. It was hard today because the wind was from west and very strong. I made 5 km to 60km mark to Caiguna and made a stop for rest. I felt pain in stomach because ate only snack food like nuts, museli and chocolate. I need to lay face down for half an hour to feel better. I had a rest for a little then I decided that’s time to change a rear tyre. Rubena tyre on the rear wheel was completely chewed. I also removed a broken bottle handler.

Now that I had new tyres on my bicycle and less baggage it helped me a little bit to cycle through a strong headwind.

I made stops every 10km. This day was a never ending struggle with the wind. I saw only blood marks on the road, bones on the roadside and crows in the sky. However every passing car with people who waved to me gave a positive motivation to push again.

Today I switched into the second speed on the front star and speed 4 on the rear star. 20km to Caiguna the temperature had dropped so I had to put on my jacket.

Finally I reached Caiguna and pitched a tent in the bushes. I dropped into the roadhouse and ate some soup and drank hot tea. I bought one bottle of water just in case. The price for the water here is 6,50 AUD for 1,5 ltr bottle. I called Ivan and went to sleep.

I made 109 km that day. The next morning I was to ride the longest straight road in Australia. 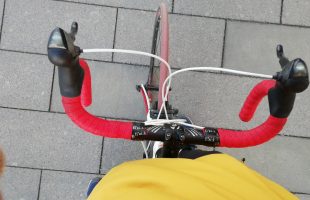 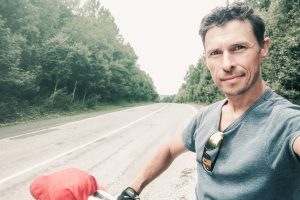 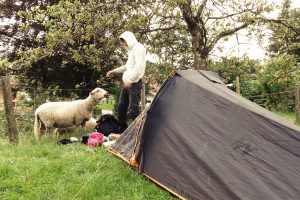 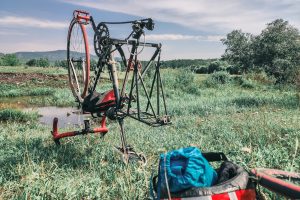 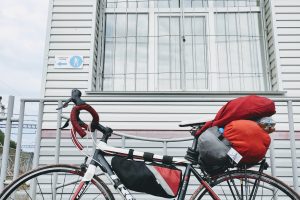 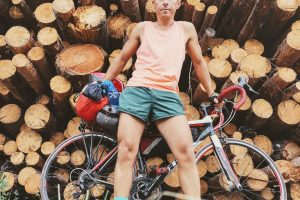 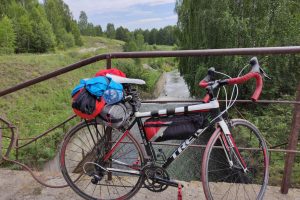 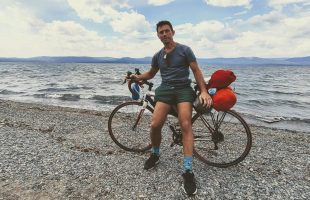 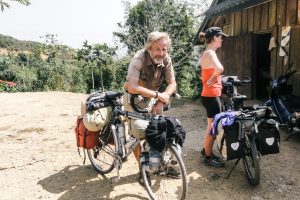 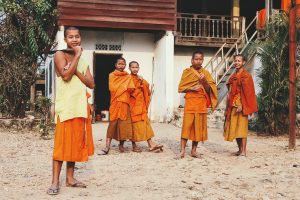 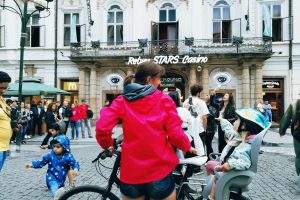