Despite it calls South Australia the temperature is really cold at night here. I survived with only Ian’s sleeping bag, which kept me warm and cozy throughout the night.

The next morning, I registered for a morning flight to Pt. Lincoln. The short 45-minute flight included a hot beverage and a muffin, which were a welcome treat. When I arrived at Pt. Lincoln airport (PLO), I was struck by how small it was, reminding me of Magnitogorsk airport (MQF) back home. I assembled my old Trek bike and packed all of my necessary gear into a rear backpack.

Before setting off on my journey, I had a brief conversation with a taxi driver who tried to persuade me to go white shark diving in Pt. Lincoln. I politely declined, but appreciated the suggestion. With a help from my friend Ivan Ibrin in Melbourne, I was able to activate a local sim card, so I was now connected.

I knew that I needed to take it easy on my first day, so I planned to only ride 60 km. Since I hadn’t been able to train much back in Moscow this spring, I wanted to give my muscles time to warm up. Along the way, I stopped at a megamarket to buy a polar blanket for the cold nights ahead and some WD-40 for my bike. As I was leaving the city, I also visited a small deli shop and picked up some chocolate bars and water (3 bottles). I hadn’t had a chance to eat lunch yet, so I treated myself to a meat pastry. The girl at the cashier wished me a “good ride,” and I couldn’t help but feel excited for the journey ahead.

As I embarked on my cycling adventure through Australia’s Nullarbor Plain, the road from Pt. Lincoln offered a smooth and easy ride. 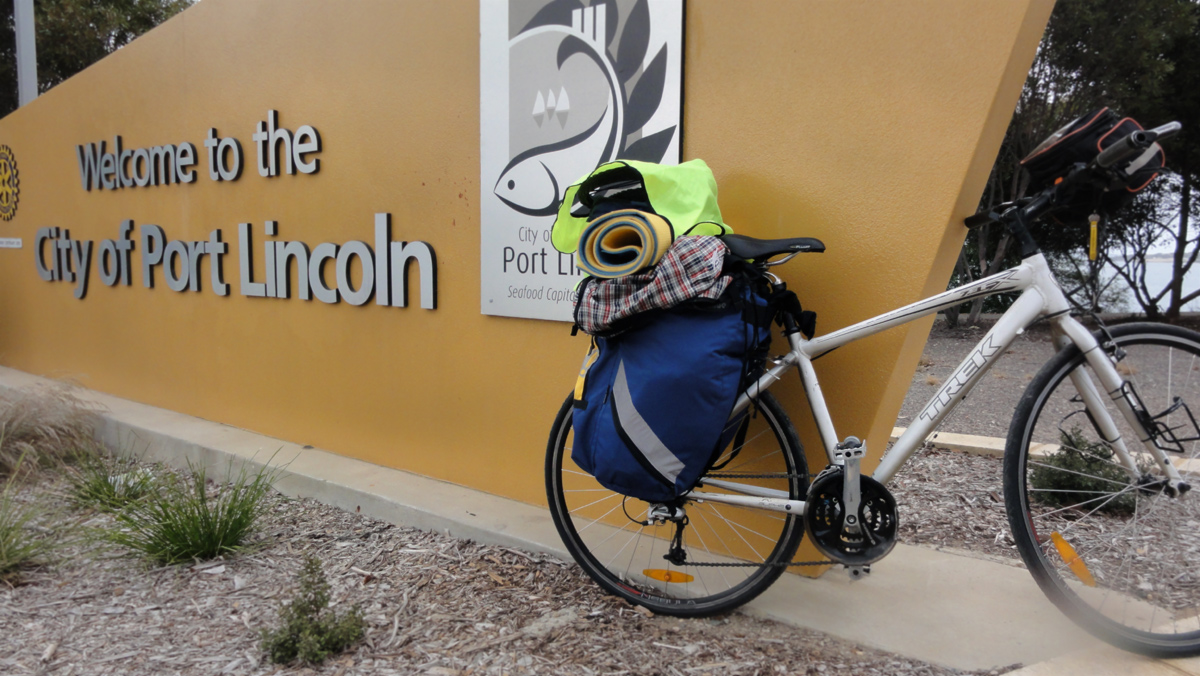 The road was relatively flat, with no major hills, making for an easy and enjoyable ride. I took the time to observe the Australian way of life, marveling at the abundance of parrots flying around in pairs. They were a mix of white and pink, and their cheerful chirping added to the sense of serenity.

As the sun began to set, I started to worry about finding a place to camp for the night. I pulled over to the side of the road to consider my options, when an old man in a car pulled up next to me. He kindly offered me some advice, suggesting that I take a 15 km detour off the highway to a fisherman’s spot called Farms Beach. He said there was a camping area there, so I decided to give it a try.

I followed the old man’s directions and soon found myself cycling down a gravel road that led to the beach. The area was bustling with activity, with cars, trailers, and even tractors parked haphazardly. I pitched my tent on the grass, washed up in the Pacific ocean, and made some quick calls to my friends before falling asleep. I woke up early the next morning, eager to continue my journey. As I packed up my campsite, I saw a girl walking back from a morning swim. The gravel road was quiet, with no cars in sight. I found a cut to the highway and continued my ride, enjoying the warmth of the sun and the singing of the parrots above me. The sheep in the fields around me seemed to watch curiously as I passed by. After cycling for 5 km on the highway, I stopped in a beautiful spot where the trees smelled like paradise. I indulged in a chocolate bar and some cola, taking a moment to appreciate the serenity of my surroundings. As the sun reached its peak, I felt the need for a rest, so I pulled over and took a 30-minute nap. I felt much better after my break and continued on my way.

As I pedaled along the scenic roads, the sheep grazing in the fields around me seemed to watch curiously as I passed by. It was moments like these that made me appreciate the beauty of bike travel and the adventures that awaited me on my cycling journey.

Before long, I arrived at the first roadhouse on my route, called Sheringa. It looked like a rock concert was planned for that evening. I grabbed a quick chicken burger and took a look at the newspaper clippings on the wall. They told the story of this roadhouse and the famous “No Where Else” road sign. Apparently, many people had tried to steal the sign, and the owner had to replace it every 20 days. Now, there was a CCTV camera attached to the sign to prevent further thefts. I found the whole thing quite amusing and continued on my way, feeling energized and ready to tackle the next leg of my journey.

I took a picture with this sign. And I bought a small map of Nullarbor.

As the sun began to set on the horizon, I knew that I was getting closer to Elliston, a small city that was only 40 km away. The friendly wind at my back and the good road beneath my tires allowed me to move at a brisk pace, and I reveled in the feeling of freedom and adventure.

As I rode, I spotted a group of emus running through the fields, their tall, elegant bodies a sight to behold. I also saw a small kangaroo drinking from a nearby water tank. As I reached for my camera to snap a photo, the kangaroo quickly ran away, watching me from a safe distance.

Just as I was about to continue on my way, a fox darted across the road in front of me, adding to the sense of wildness and excitement that I was experiencing. It was moments like these that made me feel truly alive and grateful for the opportunity to explore the world by bike.

I arrived at Elliston and found a caravan park. A small boy Tom registered me on computer and said that unpowered site cost to me 38 AUD. I’ve asked for discount for cyclists. He replied that I have to ask the boss. As I understood a boss is his father. He arrived soon and said 20 AUD for me is enough. Perfect. I found a place on the grass and pitched a tent. Then I took a shower. I made some tea in the camp kitchen and used wi-fi to talk with Ivan.

Therewas no mobile network there. It does exist but  not for me because my cellpshones do not support NextG coverage. That’s my fault. I had to buy not only a sim-card but a special phone with NextG support.

The night was warm.